Chat Now Get in Touch

Inner Ear Ltd is a digital media production agency that specialises in both the production and utilisation of high-quality digital content for organisations of all types. With over 15 years of experience, Inner Ear uses innovative methods to create content that can be used for external marketing, internal communications and business development.

If you are looking for a temporary wifi solution until your fixed connectivity requirements are solved, Prodec can help.

Speak to an expert

As one of Scotland’s leading media production companies, Inner Ear is often called upon to work in demanding locations. In 2012, Inner Ear was asked By the National Piping Centre to live video stream the 39th Glenfiddich Piping Championship, taking place at Blair Castle in Scotland. Nestled in the remote and dramatic landscape of the Scottish Highlands, the castle offered a rich history and provided the perfect setting for the world’s most prestigious bagpiping event. Whilst the production was in its planning stage, Inner Ear quickly discovered that the ancient castle was not equipped to offer any internet connection, without which, live streaming would be impossible to achieve.

Eager not to disappoint thousands of bagpipe fans across the globe, Inner Ear searched for an alternative solution and contacted Prodec Networks for assistance. Working in conjunction with Prodec Networks, a bonded mobile data technology solution was recommended to enable Inner Ear to run a live video stream of the event in its 10 hour entirety.

Inner Ear set up a mobile broadband connection in their outside broadcast truck alongside Blair Castle and using a portable bonded device they were able to transmit the video stream live around the world. Streaming to 829 unique viewers at any one time, the event was watched by 2,000 unique individuals via 10,000 streams over the course of the day.

“We had a solid, near-HD quality, stream uplink for over 10 hours which would be impressive enough with wired broadband! As a production company, our emphasis is on creating high-quality content. We are very excited by this new technology because it enables us to stream live events from potentially any location in the UK, even places where you don’t necessarily have broadband connections. I’ve been really impressed with Prodec Networks. Nothing has been too much trouble and they can work to really tight deadlines. It’s important to us that we work with friendly, helpful, resourceful people like the team at Prodec Networks. It’s great to have a reliable supplier behind the technology, especially something so vital to the success of our projects.”

Following the success of the 2012 Glenfiddich Piping Championship, Inner Ear has used the same technology to live stream events such as the Scottish Album of the Year Award, Social Media Week and the Shetland Jazz Festival. Working with Prodec Networks’ technology the company has expanded to broadcast many more shows, concerts, festivals, conferences and exclusive events from all over the UK, including the ongoing broadcast of the Glenfiddich Piping Championship each year.

I’ve been really impressed with Prodec Networks. Nothing has been too much trouble and they can work to really tight deadlines. It’s important to us that we work with friendly, helpful, resourceful people like the team at Prodec Networks. It’s great to have a reliable supplier behind the technology, especially something so vital to the success of our projects. 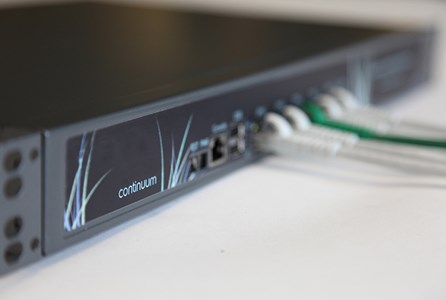 Prodec’s bonded 4G solutions enable organisations to connect to the internet without the requirement for a permanent fixed line. This form of technology is perfect for temporary wifi requirements such as events, construction sites and the travel industry where it’s either not cost effective or simply not possible to install a leased line.

Continuum bonded 4G is the perfect "office in a box" solution when terrestrial connectivity fails to deliver. Find out more about this ultra-fast internet solution deployed rapidly where and when you need it most.